Golf Courses are Saving Water and Saving Money Through New Technology and Conservation Efforts. “We happen to think that long-term, water is going to be the biggest obstacle to the game of golf, more than participation, more than anything,” said Mike Davis, the USGA’s executive director. 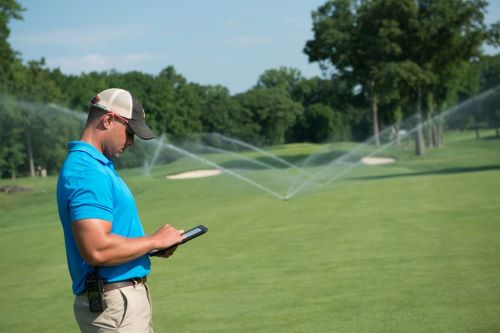 It’s not unusual for Justin Mandon to wake up in the middle of the night and check his smartphone. But unlike most users reading text messages or scanning their social media accounts, Mandon, the superintendent at Pasa Tiempo Golf Club in Santa Cruz, California, is looking at an app to monitor the course’s water treatment plant.  In 2017, the highly-regarded public course built a recycled water treatment facility – storage tank, filtration station and pump station – behind its 13th green. The project cost $9 million, but it’s paying quick dividends: Pasa Tiempo saved over 40 million gallons of potable water in its first season (May-October 2018) with the facility, according to Mandon, and about $500,000 in potable water costs.

It has given the facility three water sources: recycled water from Scotts Valley, potable water from Santa Cruz and water from its own well. These resources are invaluable given the risk of drought conditions that affected properties such as Mountain View Golf Course, a daily-fee course in Santa Paula, California, north of Los Angeles, which closed on Jan. 2 after 50 years of operation. Course operators cited the low level of the Santa Clara River, which has dried up four years in a row, that led to restrictions in watering fairways, according to an article in the Ventura County Star.

“We happen to think that long-term, water is going to be the biggest obstacle to the game of golf, more than participation, more than anything,” said Mike Davis, the USGA’s executive director.  That’s because water remains a precious commodity — and an increasingly expensive one — that the golf course industry needs to effectively manage and conserve.  It’s an issue that touches every sector of the golf industry, from municipal and daily-fee courses to private country clubs and resort courses.  The goal, says course architect Forrest Richardson, is to get the highest form of control so courses aren’t delivering any more water than is absolutely necessary. Today, this can involve drone mapping, new high-tech irrigation systems, and water-saving devices that measure soil moisture, plant health, and other aspects of the course.

The good news is that the industry has been proactive.  “Golf is a business, and it’s our courses and owners who have to pay for water — they have a vested interest, and over the years it has been golf that has pushed the agenda for better and more refined coverage and conservation,” Richardson says. “The golf industry has paid for nearly all of the advanced irrigation technology brought forward in the past 40 years.”  Richardson notes that the irrigation manufacturers – including NGF Top 100 companies like Toro, Rain Bird and Hunter – have led the charge for better rotors, valves and control. The computer-controlled systems first found on golf courses were the predecessors to those now available at Home Depot in smaller devices to control backyard irrigation.

In addition to computerized central irrigation systems, facilities have instituted the use of on-site weather stations and are switching to reclaimed water rather than risk having water officials impose restrictions that could turn the courses into sunburned badlands. These steps have produced positive outcomes.  Golf courses in the USA used almost 1.9 million acre-feet of water in 2013, compared with approximately 2.4 million acre-feet in 2005, according to a report entitled “Documenting Trends in Water Use and Conservation Practices on U.S. Golf Courses,” and published in the scientific journal Crop, Forage & Turfgrass Management. This represents a 21.8% decrease, or an annual savings of 519,537 acre-feet compared with 2005. An acre-foot is a unit of volume equal to a sheet of water that covers one acre at one foot in depth.

Some of that savings, of course, can be attributed to acreage reduction and course closings, but also highlights the great progress toward more efficient use of water and water conservation practices superintendents are employing on the golf course and that are making them better managers.  “It’s a significant accomplishment but in some ways it’s just the beginning of what we are going to need to do,” said Rand Jerris, the USGA’s senior managing director of public services.  Data collected in the “Trends in Water Use” report also identify areas where further improvements can take place, from reducing the amount of acreage being watered and maintained to embracing water sensors and other innovative technologies, and new varieties of grass.

USGA, which distributes approximately $2 million to various land-grant universities across the country, has teamed with the U.S. Department of Agriculture and the University of California at Riverside to fund research to develop warm-season grasses that maintain heat, drought and salinity tolerance, Bermuda and Zoysia grass, and also retain their color in the winter. This best-of-both-worlds scenario would require no need for overseeding, over-watering or replanting in spring. The study started with 640 strains of grass in 2016, and 12 hybrids showing the most promise have advanced to the next stage of the trial.

The USGA also developed a cloud-based app that allowed John Sanford of Sanford Golf Design to create significant cost savings at Crandon Park, a city-run facility in Miami that is the only course in North America with a subtropical lagoon. Using GPS to track golfer movement, Sanford was able to generate heat maps that identified 19 additional acres for turf reduction. That land will be converted to natural crushed stone. An additional 12 acres will convert to naturalized plantings and another eight acres to aquatic plantings, thereby reducing the irrigated turf area by over 30 percent.

In 2019, Miami-Dade County will save $150,000 on a $1.1 million water budget from increasing efficiency of sprinkler heads and optimizing watering patterns using smart technology. Once the site master plan is completed, it will amount to $350,000 in annual cost savings.  Likewise, Pasa Tiempo eliminated 25 thirsty acres of irrigated turf several years ago, dropping from 90 to 65 and letting those native grasses, usually between fairways or around teeing areas, subsist only on winter rains.

Richardson, who used a drought resistant Paspalum turf in his re-design of Baylands Golf Links in Palo Alto, California, notes a new-found willingness among courses to reduce the turf footprint.  “In the early days of this movement it seemed that courses needed a financial incentive handed down by government, such as in California where credits for every square foot of turf removed was passed along,” he says. “Now wake-up call is that it simply makes sense to the bottom line.”

At Lookout Mountain Golf Club in Phoenix, Richardson removed two decorative lakes from the course. Millions of gallons of water were being lost to evaporation and underground seepage. So, he converted the man-made lakes to desert hollows, while preserving the strategy and aesthetics of the golf course. The annual water savings is estimated to be more than ten million gallons.  “Everyone wins, mostly the savings in water cost,” Richardson said.

Jerris contends that if the industry fails to make significant changes in the way it consumes water, there could be a day where golf in this country looks like skiing, becoming a very seasonal activity and confined to where there is enough natural rainfall to support turfgrass. At the fifth Golf Innovation Symposium held in Japan in March, the USGA presented a challenge statement for the industry to improve golfer satisfaction by 20 percent while reducing critical resource consumption by 25 percent by 2025.

“It’s not inevitable that the future is grim,” Jerris said. “What’s inevitable is that we have to move quickly to embrace some of these new technologies and embrace different attitudes to maintaining golf courses.”  That is why the U.S. Opens at Pinehurst No. 2 in 2014 and Chambers Bay in 2015, which showcased the concept of “maintenance up the middle” and that “brown is beautiful” were important conversation starters.  “It highlighted what we can do on golf courses and still provide a quality golf experience,” said Kimberly Erusha, head of the USGA Green Section.

For all these efforts, it isn’t hard to find headlines screaming that golf is a major drain on the water supply or criticize “water-guzzling” golf courses.  “There’s still a public perception that golf consumes too much water, but we’re doing a lot better than you might think,” said Craig Kessler, Southern California Golf Association’s director of governmental affairs. “The reality is that less than 1 percent of the potable water in California is consumed by the golf industry.”

Indeed, golf courses consumed 1.44 percent of all water used for irrigation in the U.S. in 2013.  Almost all regions increased their use of recycled water, particularly the Southwest, Southeast, and Pacific regions. Just as importantly, hand-held soil moisture sensors, which are available to most every course in the range of $800, help superintendents make better decisions about when to apply water to a golf course.  “Water is a concern nearly everywhere, even in places where there may be little or no water cost to the golf operation,” says Richardson.  Even so, technological advances can’t solve every issue.

After Pasa Tiempo finished building its well on No. 12, PG&E, the local utility company, told club officials they couldn’t install a meter without a physical street address. That proved to be a problem since the well is situated alongside a fairway, not a street. Eventually, Pasatiempo general manager Scott Hoyt connected with a county official who created an official address – “Mr. and Mrs. Well” now live at 86 Pasatiempo Drive collecting a lot of junk mail, he jokes.  The solution placated PG&E and allowed the club to complete the project, allowing the cost savings, and water conservation, to begin.