The transformation to Champion Bermuda will begin with the International Course this summer, while the National Course is scheduled to get new greens in the summer of 2017.  Patrick Dill, director of golf, said the decision to go with Champion over other modern ultradwarfs like Tif-Eagle or Mini-Verde was based on how well Champion Bermuda does in the local climate.  "We went with it because it's a little more cold tolerant. It holds its color better, it really doesn't go dormant in the winter, and we don't have to overseed," Dill said. "If it does go off color, we can show it a little better with a little turf paint."

The two courses at the resort, which opened in 2000, host between 60,000 and 65,000 rounds a year, so durability was a key factor as well, Dill said. And the fact that Champion doesn't need to be overseeded means that there's no rough transition in the spring between cool-season grass on the greens and Bermuda.  Of course, it does mean that for a few weeks after June 1, there will only be 18-holes open, and the resort is expected to be as busy as ever this year.  "All you have to do to get business is schedule a renovation," Dill said, tongue in cheek. 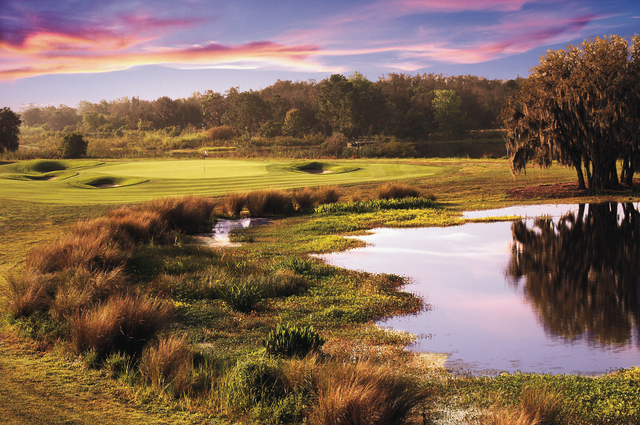 The International Course is probably the better of the two courses at the Omni Orlando Champions Gate Resort. Designed in an Australian coastal links tradition, the course was the site of the annual Father-Son Challenge (featuring prominent tour pros and their sons) from 2003-2008 and has played host to numerous other high-profile professional and amateur events. The links style course is designed around scenic natural wetlands, and features long carries, deep pot bunkers, tall grass-topped dunes, and large undulating greens.

Conversely, the National Course was designed in the "Florida golf resort" style, weaving its way through the naturally rolling central Florida plains, and features mature Pine, Oak, and Cypress groves, spring fed lakes, bunker protected fairways and greens, as well as small, challenging putting surfaces. Some recent modifications were made the National Course because of nearby development. The old second and 18th hole were removed and replaced with a new par-3 10th and par-4 10th, changing the course from a par 72 to a par 71.

The National Course is located next to the new Champions Gate Country Club, which is not officially affiliated with the resort. The country club, which is scheduled to turn fully private once homebuilder Lennar sells enough homes, is currently open to the public. Its reasonable green fees have attracted many daily fee players, who are being exposed to the new development around the course. In 2015, the George Clifton-designed 7,058-yard course received more reviews than another other course in the country on GolfAdvisor.com, and readers gave it high marks.  Resort guests, of course, can play ChampionsGate Country Club, and it is expected to help take up some of the slack this summer while the International Course is closed.

One of the premier resorts in central Florida, Omni Orlando ChampionsGate is also home to the David Leadbetter Golf Academy, where many of the world's top players practice and train (the public is welcome, too). Located close to Disney World west of Orlando, the 720-room hotel is a AAA four-diamond experience, with world-class dining, rooms, suites, convention space and recreational activities that include a lazy river and a lighted par-3 course for after-dark casual golf or practice, available to resort guests.